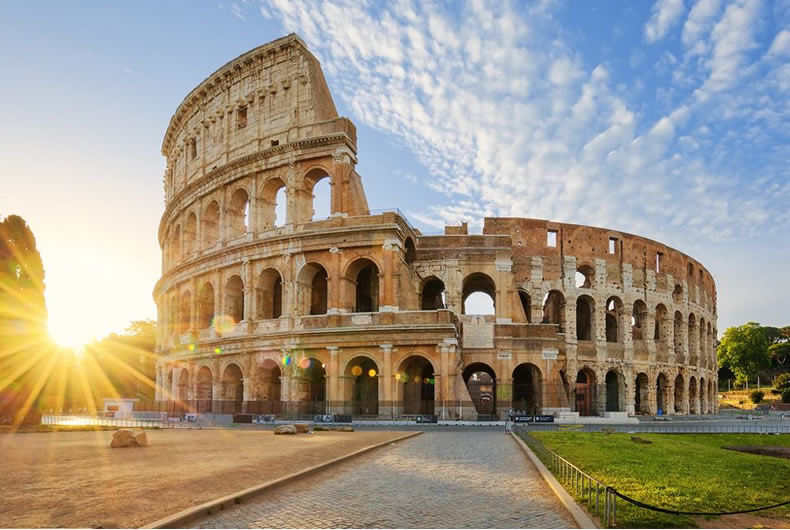 Rome is the Eternal City, since its foundation is dated as far back as 753 B.C. Its founders, Romulus and Remus, were, according to the legend, the sons of  the Roman god of war Mars, and Rhea Silvia, a Vestal Virgin priestess; they were also said to be descendants of Aeneas, the Trojan hero. What started as a village of shepherds and small farmers in time became the capital of the most powerful and civilized empire of antiquity. This tour will reveal to you the marvels of this city that is unmatched anywhere in the world. Rome’s history is made of many monuments and buildings that still stand today after thousands of years!

A good start of any Tour of Rome is the Colosseum and the Roman Forum, who are the very symbols of Rome. The Colosseum immediately evokes images of fierce gladiatorial fights, with wild beasts unleashed against Christians. Roman Forum, is the market place that in ancient Rome used to be the centre of the political, economic and social life of the city. Picture yourself walking through ruins of buildings that were once the heart of Roman Power. You can even take photos next to pillars, arches and stairs that have been named after gods, goddesses and emperors! However, this awesome structure also highlights the different attitude introduced by Christianity into the social life of the Romans who gradually came to adopt the new religion, which spread to the rest of the Western world. Almost next to the Forum is the  Via dei Fori Imperiali that leads from the Colosseum to Piazza Venezia, dominated by the awe-inspiring Monument  to the Unknown Soldier (nicknamed  the Typewriter because of its shape). 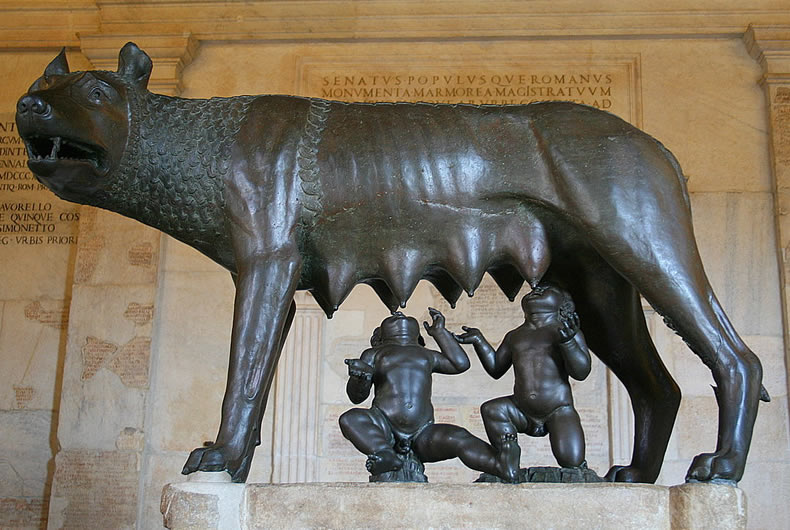 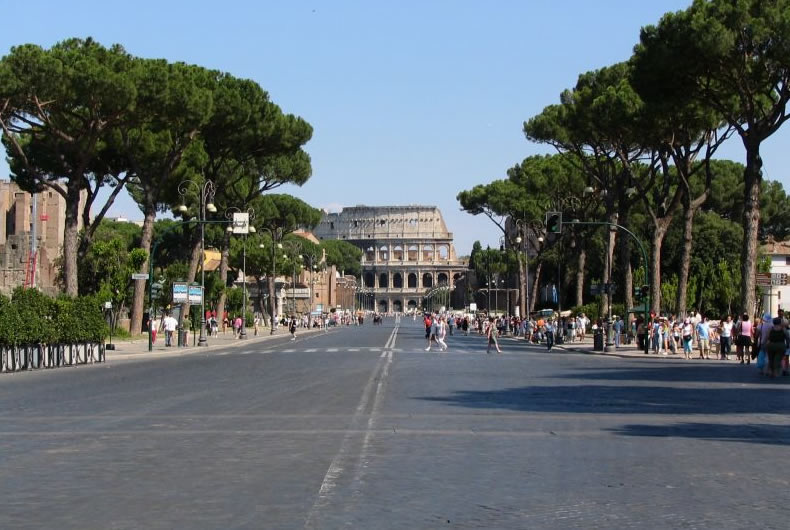 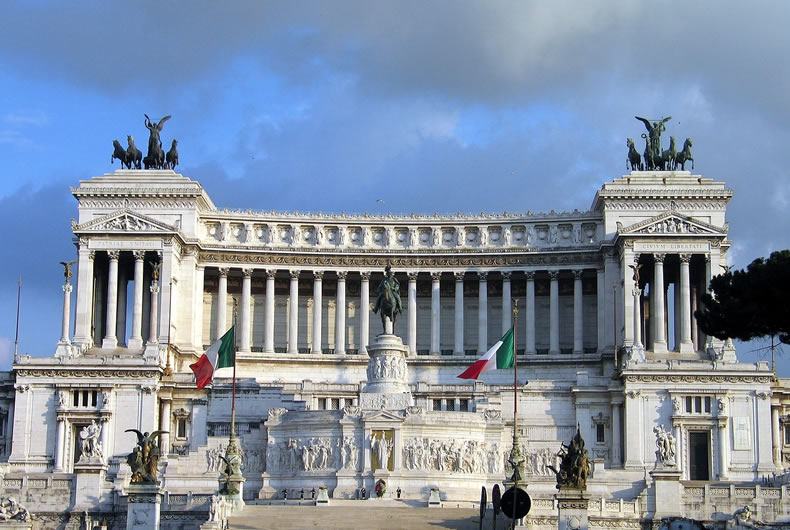 Next stop is the Pantheon, that was originally a temple, later turned into a Christian church and finally into the burial place of famous Italians and of Italian royalty. If you look at it from the top of the Janiculum Hill, the Pantheon actually looks like a modern indoor sports palace, while it is one of the oldest buildings in Rome. The continued use of the Pantheon through the ages has contributed to its preservation so that it has come down to us pretty well as it was originally. Its stately and dignified appearance has inspired the design of many famous buildings throughout the world, such as the Jefferson Memorial, in Washington, D.C.

Then you will go to visit Piazza Navona, or Navona Square, one of Rome’s most beautiful squares, known for its  perfect Baroque style as much as for the rivalry existing between Gian Lorenzo Bernini, who designed the Fountain of the Four Rivers and  Francesco Borromini, who built the opposite Church of SantAgnese in Agone. According to a popular story, the statue of Rio de la Plata seems to be stretching out its arm as if to protect itself from the collapse of the Church, while the Nile covers its eyes that cannot stand the sight of the horrible Church facing the Fountain. This is the place where you can have your portrait sketched in only a few minutes. 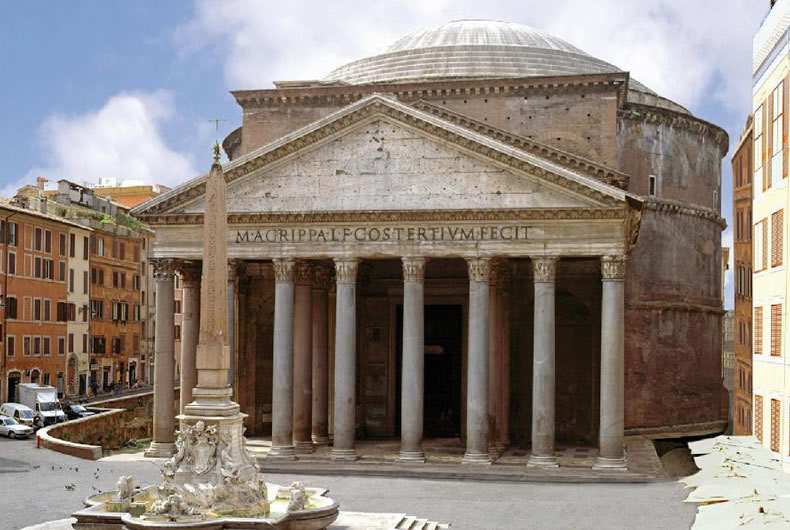 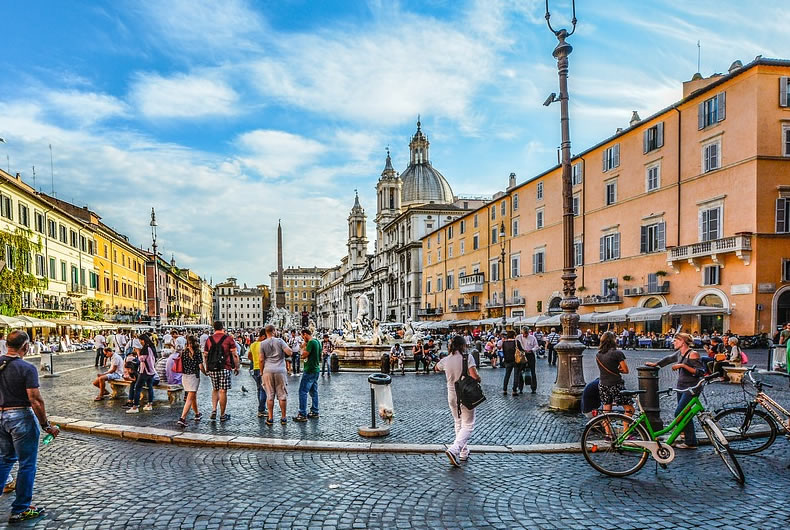 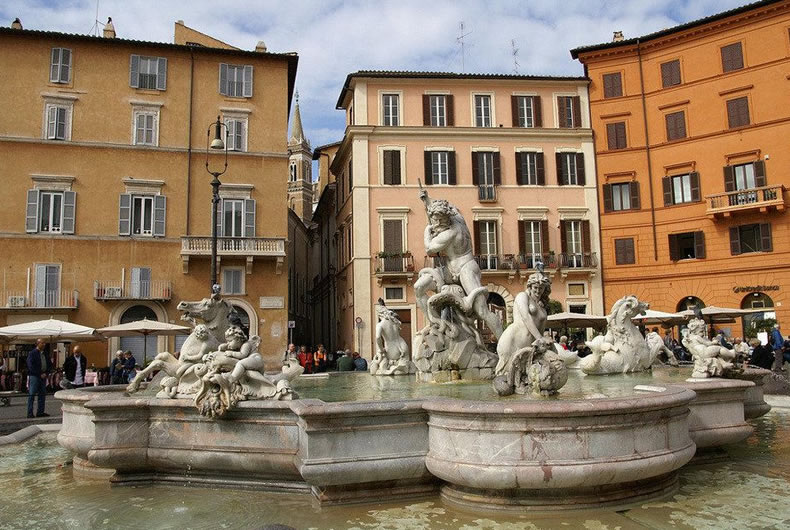 Next, piazza di Spagna, is an 18th century construction that is celebrated for its elegance and artistic value. The square at the bottom of the Spanish Steps leading down from the Church of Trinita’ dei Monti, is another tourist favourite.  The same applies to this square as to Trevi Fountain, or indeed to a number of places in Rome: when you get to see them, they look familiar, somehow; it is because you have seen them in so many movies that they have stuck in your memory. The charm of its Baroque style defies description, but has an enormous appeal on anyone seeing the square for the first time.  Not too far away, Trevi Fountain has been for ages a favourite haunt of tourists who are always anxious to comply with tradition by throwing a coin in the Fountain as a wish for their return to Rome. The best shopping area lies between Piazza di Spagna (Spanish Steps) and Trevi Fountain. A host of familiar high-class names and brands line the streets, ready to offer all the best available in the field of beautiful Italian fashion. 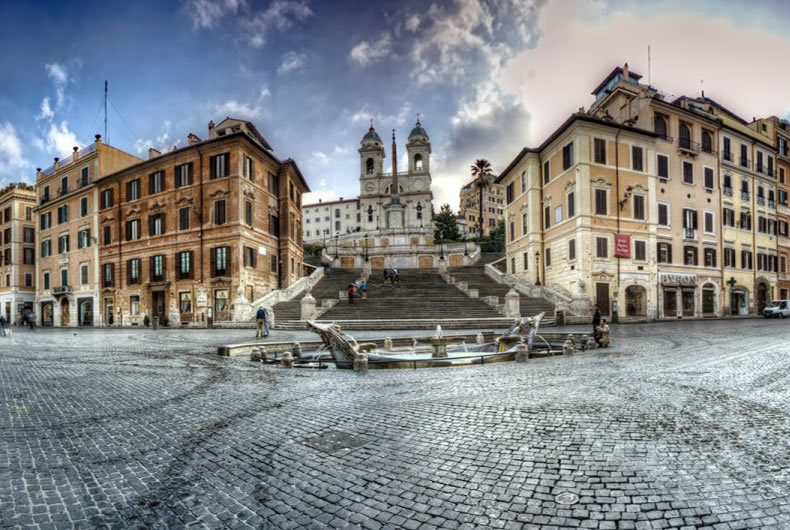 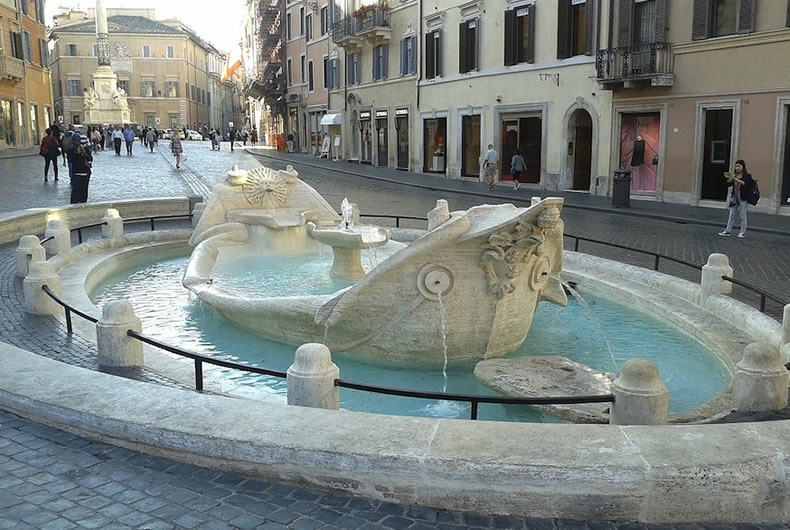 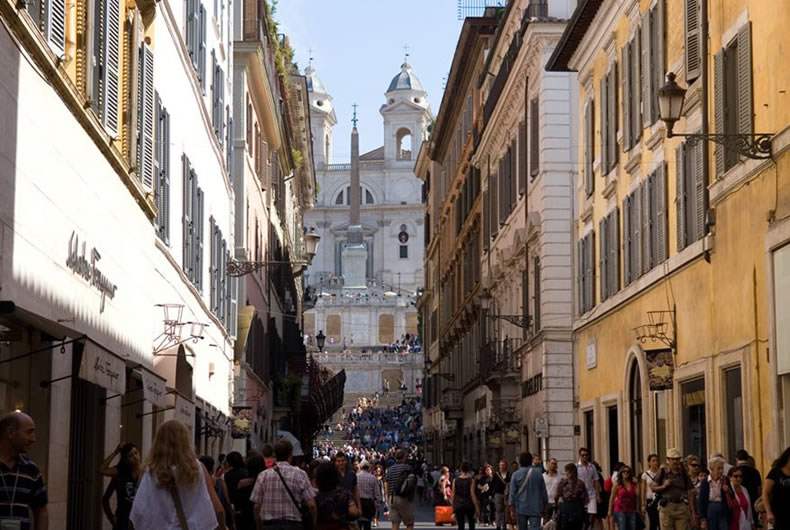 The sightseeing tour of Rome is now  about to begin its second part, the tour of the Vatican. You will visit the 500-year-old collection of works of art housed in the Vatican Museums, as well as the celebrated Sistine Chapel, which was frescoed by many famous Renaissance artists, including Michelangelo. Incidentally, this is the place where the cardinals’ conclaves are held to elect new Popes. St. Peter’s Basilica needs no introduction. The tour of the Vatican will take you inside this awe-inspiring, splendid example of Renaissance/Baroque architecture, which is widely considered the heart of Christendom and is the centre of Catholicism. Several of the best-known architects and artists of the time, such as Bramante, Michelangelo and Bernini, contributed with their genius to its construction, which took over a century to be completed. Here, you will see an excellent collection of antiquities from Egyptian times onwards, including Greek and Roman artworks and Renaissance masterpieces. Passing on to the Sistine Chapel you will be able to admire Michelangelo‘s astonishing fresco of the Last Judgment, a striking example of the genius of this unsurpassed Renaissance artist. 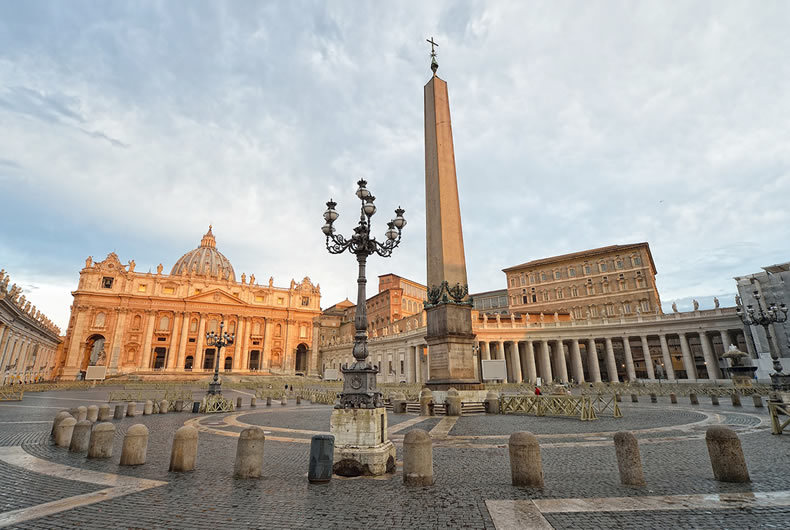 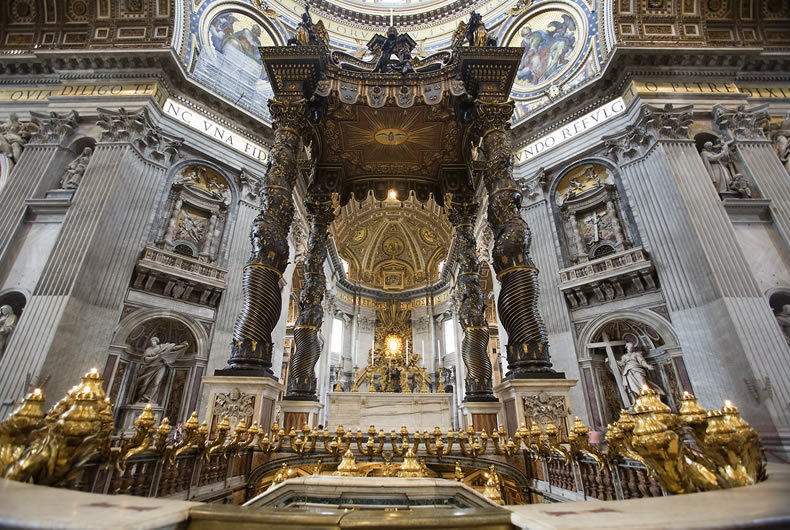 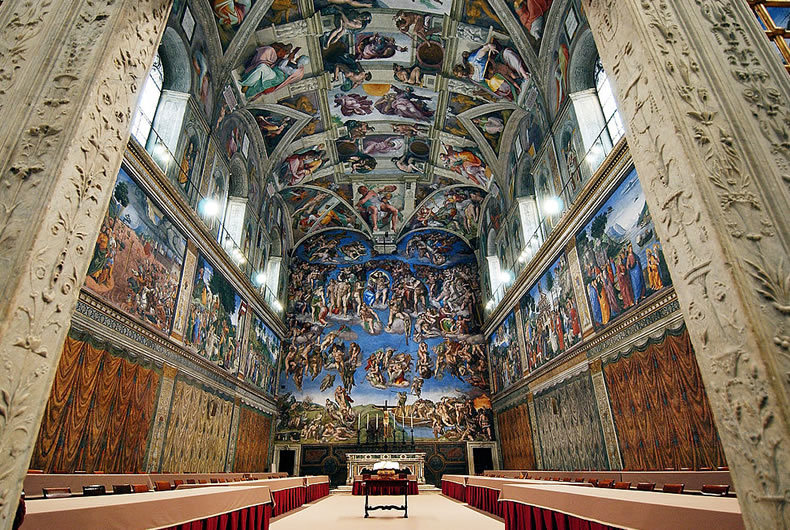 You will be picked up under the ship by an English-speaking driver who will take you for a tour of the Eternal City, Rome. It will begin from the very heart of Ancient Rome. The visit will include the Roman Forum, the Colosseum, Via dei Fori Imperiali, Piazza Venezia, the Pantheon, Piazza Navona, Spanish Stes, Trevi Fountain, and the Vatican. At your request we can make arrangements for your lunch at some time during your tour. In addition, for who wants, we will be happy to arrange a dinner at a typical restaurant, combined, if you wish, with an evening Tour of Rome to get a flavour of the city’s magic atmosphere at night.

Full-day tours will normally last 9 hours, inclusive of travelling time to and from the ship.. The price is not inclusive of museums tickets or/and Authorised English-speaking guide fee.
Kindly note also that, in order to ensure that the tour takes place as described above and within the ordinary time limits, it would be essential for you to obtain admission tickets to the Colosseum and Vatican in advance. We shall of course gladly make arrangements on your behalf to this effect. 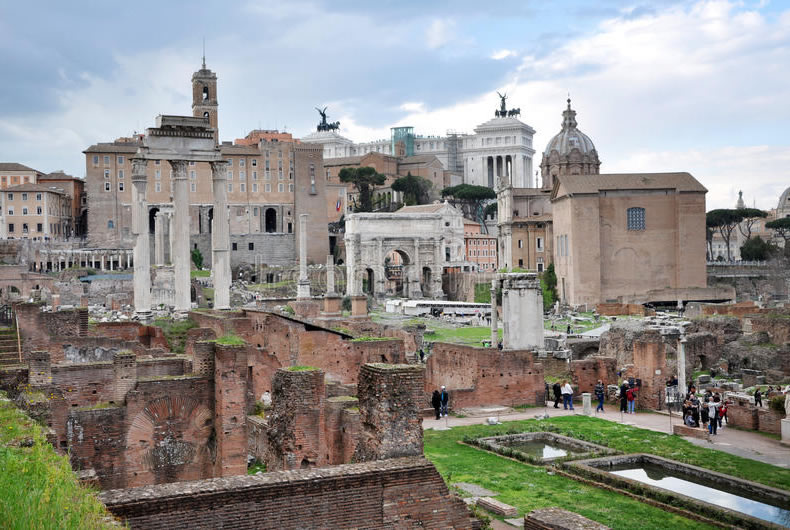 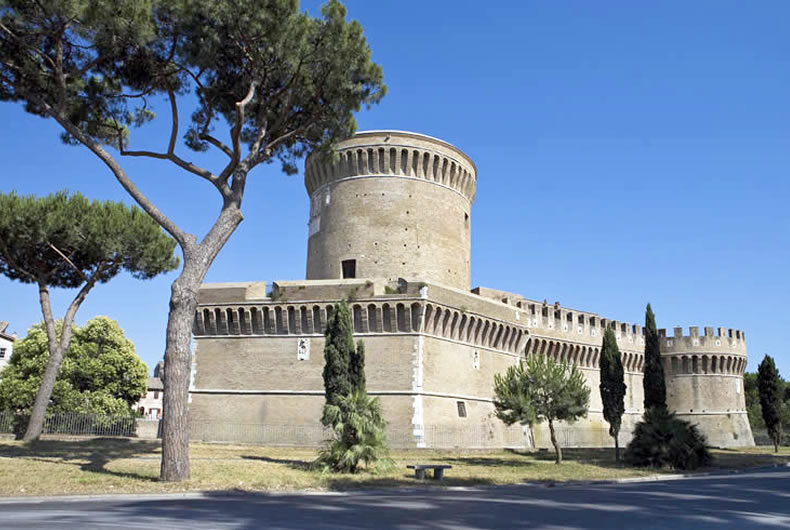 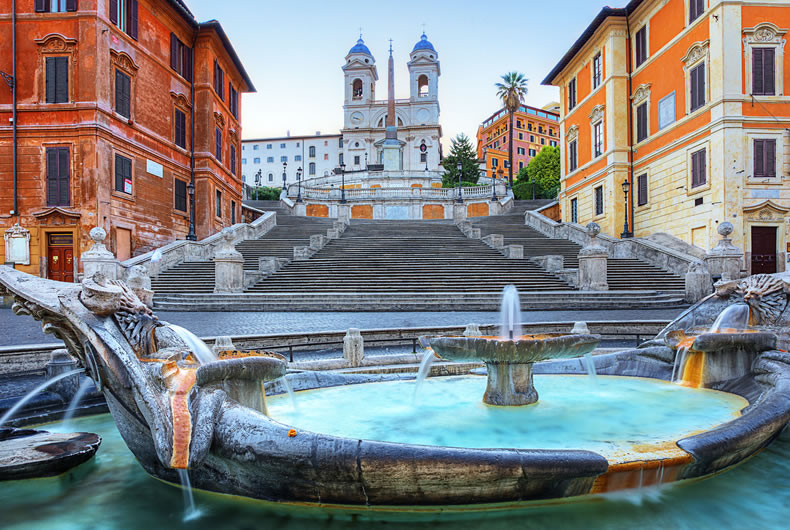 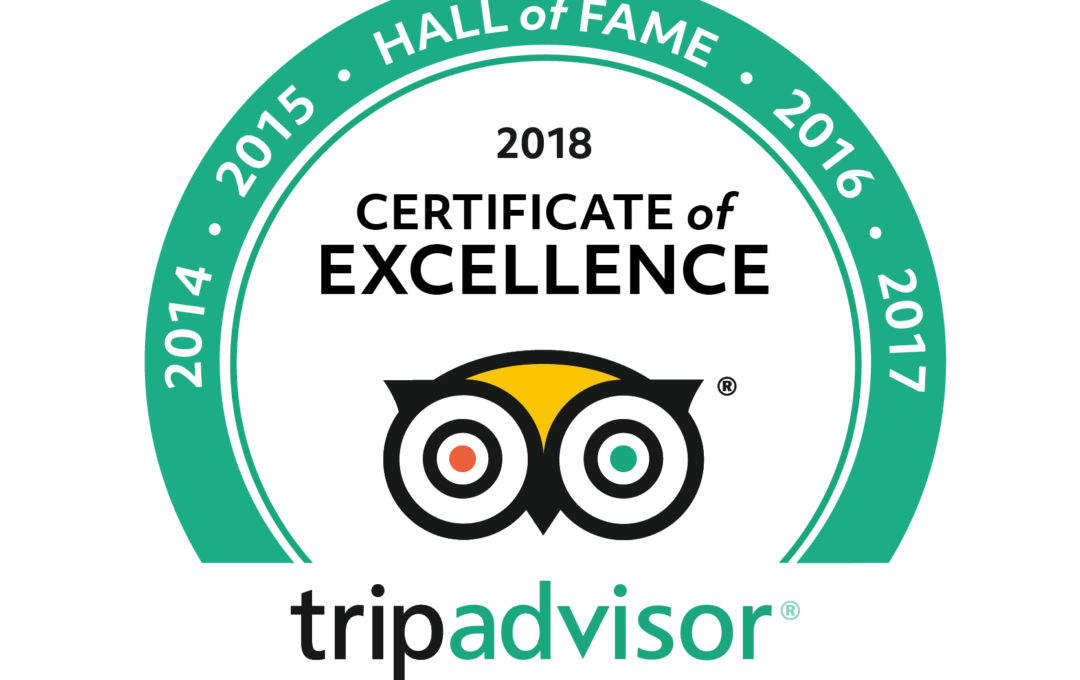 Book your transfer
Bounty Limousine Roma - Via della Cona, 20 03018 Paliano (Fr) P. Iva 12610251006 C.F. NROJLN77C10Z100B
Back To Top
We use cookies to ensure that we give you the best experience on our website. If you continue to use this site we will assume that you are happy with it.OkRead more